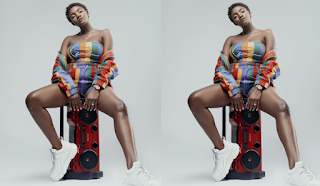 Nigerian singer Simi who used to be a gospel singer was born on 19th April, 1988 to Mr. Charles Oladede Ogunleye and Mrs. Jedidah Ogunleye in Ojuelegba in Lagos.

She is the last born of four (4) children. Stars International School is her Alma Mater (Secondary School) and later studied Mass Communication at Covenant University.

Simi engaged herself in her church choreography whiles she was very young and also joined the choir group as well. At age 10, Simi wrote her first gospel song but officially started her music career in 2008 and released an album titled ”Ogaju” which included series of other songs like ”Ara lle” and ”Iya Temi” which was produced by Samklef.

Simi changed from doing gospel music because she said she was doing music purposely for money and wanted to purview and also wanted to explore more in music. Though the decision to be a secular musician was tough for her she still haven’t changed her relationship with her maker.

Songs like ”E No Go Funny” and ”Tiff” were two singles Simi released in January 9th 2014 which was air played constantly and became the interest of the people. On 30th August 2015, ”Tiff” video brought forth to play and was directed by Josh Clarke. It was nominated as Best Alternative Song in the Headies (2015).

X3M Music signed Simi in 2014 after she released her 5th track of her EP which was constituted with covers by famous musicians such as Rihanna’s ‘Man Down’ and Adele’s ‘Set Fire To The Rain’.

Simi emerged winner as the most promising act in the 2015 Nigeria Entertainment Awards.

Because of her consistency and hard work, Simi has won series of Awards and has been also nominated in numerous which includes;

AFRIMMA Songwriter Of The Year (2017)

Best Recording Of The Year, Best R&B Single, Album Of The Year At Headies (2018)

Simi is also known as an actress and a sound engineer. She is married to colleague music industry mate, Adenkunle Gold.

Simi net worth is estimated to be aorund $1 million.

Adekunle Gold Goes Over The Moon After His Wife, Simi Stunned In Latest Photo

A curious social media user wants to know how broke guys get sex. “Favez” took to her twitter account to...