Controversial Nigerian crossdresser, philanthropist, and brand influencer Idris Okuneye well known on social media as Bobrisky has bragged about her source of money and her account balance.

One of the Nigerians celebrities who like to show off their cars, houses, jewelries and other stuff is Bobrisky. A few days ago, Bobrisky flaunted her account balance which needs few notes to hit a billion.

“11 figures close to one billion. I covered 2 digit o count the figures. I’m not those your favorite celebrities showing off on IG without nothing for their account. Learn from me” he said.

“I’m I d only person making millions daily and indoors without stress? Today’s transaction on 16th April is 14,500,000.
Let see how much I will make tomorrow. Never compare me to those rats

My name is bobrisky 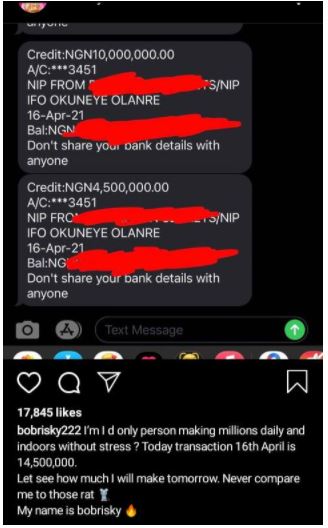 DO YOU AGREE? Wizkid Gave Tems Global Recognition (See How)

Bobrisky Sleeps With Yahoo Boys, Blackmails Them To Get Paid – Tonto Dikeh

DO YOU AGREE? Wizkid Gave Tems Global Recognition (See How)