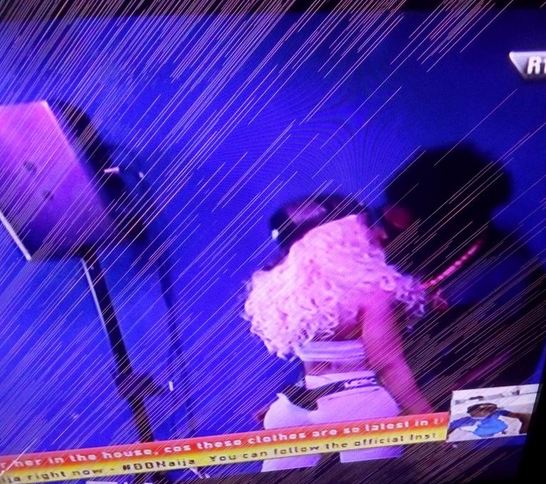 Ike and Mercy took their love to another level during the Saturday party at the ongoing Big Brother Naija 2019 reality television show tagged “Pepper Dem“.

Naija News reports that the love birds were spotted kissing and smooshing to DJ Sose’s tunes on Saturday night.

This is not the first time the duo will be displaying affection for each other as they were also spotted all over each other during one of the shower hours last month.

This is not the first time the duo will be displaying affection for each other as they were also spotted all over each other during one of the shower hours last month.

Meanwhile, the fourth edition of the Big Brother Naija reality show which is hosted by former Big Brother contestant, Ebuka Obi-Uchendu, is taking place in Nigeria after the last two editions were filmed in South Africa.

The show which will run for 99 days, is broadcasting live in 45 countries from Nigeria through East, West and Southern Africa on DStv on channel 198 and GOtv channel 29 24/7.

The would-be winner of the reality show will leave the House with N60 million.

Breakdown of the prizes for the winner includes; N30million cash prize; an SUV from Innoson Motors; a trip to Dubai for two, packaged by TravelBeta; a home make-over courtesy Scanfrost; a year’s supply of Pepsi and One Africa Fest VVIP experience; a year’s supply of Indomie Noodles and Munch It; and a brand new Oppo mobile smartphone.

Naija News understands that BBNaija Season 4 grand prize is an increase from the season three edition, which saw Miracle Ikechukwu Igbokwe win N45m worth of prizes.

BBNaija 2020: Everything you probably missed at the 1st Saturday night party

Dorathy: Biography, Networth And All You Need To Know

Dorathy: Biography, Networth And All You Need To Know