9M TALK!! What Happened Between Wizkid & Tems At O2 Arena, Was It Really A Harassment or A Planned Drama?

Nigerians have taken to social media to drag superstar singer, Wizkid for trying to get ‘touchy’ with Tems on stage. 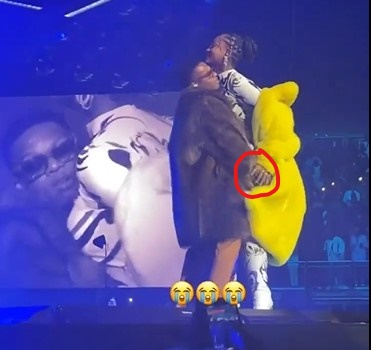 A video which is circulating online shows the moment the “Essence” crooner tried to lift Tems during their stage performance in London.

Wizkid stretched his hands towards Tems backside in an attempt to lift her up on stage, but she quickly and subtly brought his hands down.

The clip was captured during the ongoing ‘Made In Lagos’ Concert in the O2 Arena, London, while performing their monster hit titled ‘Essence’.

Fans watched the clip and were not pleased with Wiz, while some described it as harassment, other fans said he did not realise that Tems is not Tiwa Savage, who seemed comfortable with such behaviour.

I believe y’all must have watched the video by now, so tell me what your observations are.

And is it not obvious that they’ve knacked each other already?

What Happened Between Wizkid & Tems At O2 Arena, Was It Really A Harassment or A Planned Drama?

Let’s hear from you guys

Drop your comments below